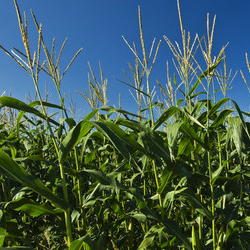 Nitrogen is critical for crop development. But producers know that the amount needed for corn is difficult to determine, since crop requirements are influenced by factors that range from soil properties to rainfall, to how a crop is affected by temperature changes.

To address this, Agriculture and Agri-Food Canada (AAFC) scientists have developed an online tool known as SCAN. Short for Soil, Crop and Atmosphere for Nitrogen, SCAN helps farmers determine the precise amount of nitrogen needed by individual corn crops.

Developed from Québec and Ontario data, SCAN calculates the optimal level of nitrogen for a given crop by analyzing weather information from Environment and Climate Change Canada and field data provided by growers, such as soil properties, previous crop data, soil organic matter content, economic ratio, and the corn's nitrogen status. The tool's accuracy is thanks to information gathered from hundreds of trial studies on how corn responds to different nitrogen rates.

AAFC is now testing a user-friendly web tool to bring the information to the farming community and is negotiating a license to commercialize SCAN. It should be on the market in time for the 2017 season.