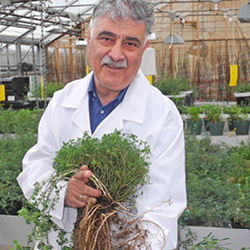 It's been grown under water for six weeks at a time, buried under snow for months, and grown in drought conditions in Ontario and Nova Scotia. Designed for use across the northern latitudes of North America and Europe, the Rhizomatous Alfalfa variety still known by its experimental name, CRS-1001, has surpassed all expectations in evaluation trials in eastern Canada. It has even shown good seed yield in the Prairie Provinces.

CRS-1001 is the product of a long-term alfalfa study that began in 1988 when Dr. Yousef Papadopoulos and his team assessed its persistence and tolerance to prolonged flooding periods in the spring and fall on the dykelands of the Nappan Research Farm in Nova Scotia.

Fifty plants were identified as being persistent under those conditions, and became the experimental variety now known as CRS-1001. Since then, CRS-1001 has been used in several research trials for grazing and forage production.

"What makes this alfalfa variety unique is its ability to grow underground stems—called rhizomes—from the main plant, creating new plants alongside the parent," says Papadopoulos. "This accounts for some of its long-term persistence, and allows it to refill holes in the forage stand."

Dr. Papadopoulos says field testing has not only proven that CRS-1001 can tolerate extreme Canadian climates, but has the potential to become an industry leader as a grazing and forage crop.

"This new variety has really superior forage qualities that will benefit all Canadian farmers," says Papadopoulos. "In short, CRS-1001 is a late-flowering, winter-hardy alfalfa variety that is tolerant to mid-summer drought, spring and fall water-logging, and grazing."

Seeds of this new variety are expected to be available through seed dealers in 2018.