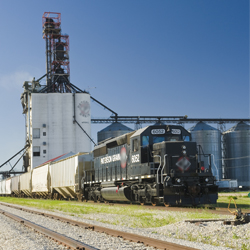 With another busy and productive crop year on the horizon, it is important for grain farmers and producers to know they are able to rely on a transportation system that will get their products to market safely and in a timely manner. On average, half of the grain produced in Canada moves over 1,500 kilometers from country to port in order to be sold beyond our borders.

The Transportation Modernization Act (Bill C-49), which was adopted on May 23rd, 2018, will help ensure a more transparent, fair and efficient freight rail system for our grain farmers and shippers of all commodities.

The Act includes a number of new tools and benefits for the grain industry, such as establishing reciprocal penalties between railway companies and their customers, improving the powers of the Canadian Transportation Agency, and adding soybeans as a crop covered by the Maximum Revenue Entitlement. The Act also increases competitive access to rail service for grain shippers captive to only one railway, through the new Long-Haul Interswitching provision.

With the passage of the Transportation Modernization Act, Canadian farmers have a strong long-term solution for reliably in getting their products to markets, and taking advantage of the growing worldwide demand for Canada’s top-quality grains and oilseeds.

Additional information about the Implementation of Recent Amendments to the Canada Transportation Act can be found online.