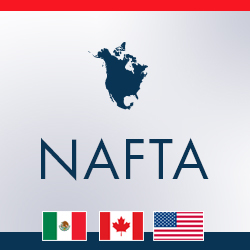 Canada, the United States and Mexico held a fourth round of talks in Arlington, Virginia last month to modernize the North American Free Trade Agreement (NAFTA).

Three other rounds of negotiations have already taken place:

Mexico will host the fifth round of talks in Mexico City from November 17-21, with more rounds to be scheduled in 2018.

NAFTA partners are working hard to ensure the new agreement provides a solid framework to create jobs, economic growth and opportunity for middle class families in all three countries. Ministers have reaffirmed their mandate to Chief Negotiators to reach an agreement in a reasonable period of time.

More than $85 billion in agricultural trade flows between the three nations each year. The deeply interconnected North American trade networks—which exist today largely thanks to NAFTA—support millions of jobs.

The Canadian government is also consulting with stakeholders and the public on the negotiations. You and all Canadians are invited to share your ideas, perspectives, and priorities on NAFTA.