How grape growers got better control of grape berry moth 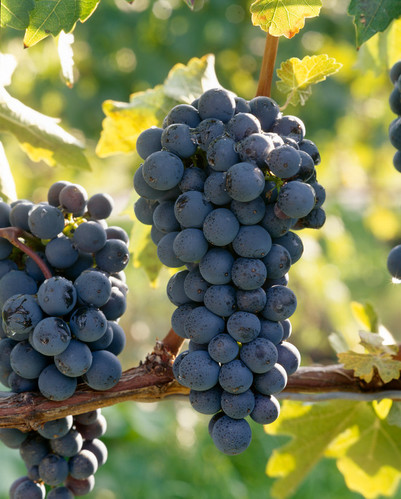 You see, the growers were worried.

They were running out of options for controlling the grape berry moth. The moth is a major insect pest causing serious economic losses to commercial vineyards.

Either the chemical companies manufacturing the pesticide products were not continuing with registration. Or the Pest Management Regulatory Agency (PMRA) was pulling older products after a re-evaluation to see if they still met the latest scientific standards for health and environmental safety.

One of the first pesticides to be removed was parathion. It was an organophosphate that growers "really liked," according to McFadden-Smith of the Ontario Ministry of Agriculture, Food and Rural Affairs. That's because its vapour action was effective against all the berry moth's growth stages.

About the same time, grape berry moth was developing resistance to the more frequently used insecticides.

Not long after parathion was removed, studies documented resistance to other organophosphorus insecticides in oriental fruit moth and coddling moth. Both of which are the same order of insects as the grape berry moth.

A study conducted in Pennsylvania and New York in 2002 also detected resistance in the berry moth to carbaryl, another popular insecticide with the brand name Sevin.

Luckily, growers had somewhere to turn.

Agriculture and Agri-Food Canada had just created the Pest Management Centre (PMC) in 2003 to help growers fill the gaps in their toolboxes.

Since its creation, the PMC has held an annual workshop at which growers of specialty crops like grapes identify their toughest pest challenges. The PMC then works to find new tools and technologies that will protect these high-value, low-acreage crops, safely and effectively.

One way the PMC does this is through pesticide efficacy and residue field trials.

These trials are essential; they generate the scientific data the PMRA must have to assess the efficacy and potential risks of any pesticide proposed for registration in Canada.

That's why in 2004, McFadden-Smith and Brewster were among those who made getting a new product for Ontario growers a top priority. They wanted the PMC's help to expand the label of the insecticide Intrepid 240F to include grape berry moth use.

Now, adding one new selective insecticide to the growers' arsenal would help. But it wouldn't be nearly enough for effectively managing resistance.

As McFadden-Smith explains, "It's all about having options for rotation."

So, when the PMRA looked at eliminating Guthion in 2005, McFadden-Smith and Brewster returned to the PMC.

Guthion was the main broad-spectrum organophosphate grape growers were then using for grape berry moth. That's because it worked "very well," explains Brewster.

This time McFadden-Smith and Brewster asked the PMC to carry out trials on two other insecticides: Assail 70WP and Altacor 35 WG.

They followed up their request in 2006 for yet another product: Success 480 SC. The pesticide was first registered in Canada on other crops that same year.

It was a rough couple of years as the growers waited for the registration of these products. It takes time (and sufficient pest pressure) for the PMC to complete its trials and prepare the data it submits to the PMRA. And then the PMRA still has to review the data and approve the new use.

During that time, grape growers were mostly relying on synthetic pyrethroids to manage grape berry moth. But pyrethroids have short residual control in the hotter summer weather.

"We were not getting the control we needed and populations were getting out of hand. Crop losses were up in the 40 to 50 percent territory in some cases," says Brewster, who provides extension services in the Niagara region.

Giving growers other options that work 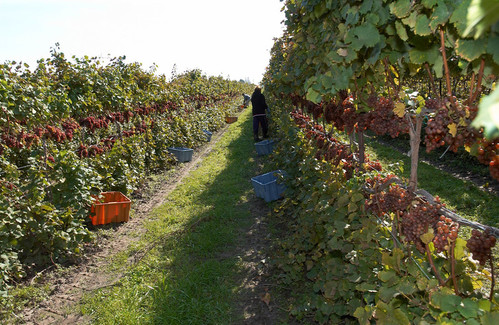 The PMC was proactive in trying to help. Knowing that grape growers had access to only a few insecticides, it began exploring other ways it could help the growers control grape berry moth.

In 2007, it oversaw the launch of two projects that investigated the use of synthetic sex pheromones, the chemical odours female berry moths release to attract males. Deliberately releasing enough of the pheromone confuses the male moths so that they can't find the females with which to mate and produce offspring.

This mating disruption, as it is known, reduces the berry moth population and diminishes the damage to grapes as a result. Growers who use this method can, if not eliminate the need for insecticides, at least cut down their use.

What's more, to make the pheromones more affordable, one of the projects Developing mating disruption for the integrated management of grape berry moth placed fewer than the recommended number of dispensers on the outer edges of the test plots to see whether the pheromones could still be effective.

By studying the best time and number for placing the dispensers in vineyards, the projects gave growers a proven technique to incorporate into an IPM program for managing grape berry moth sustainably.

The long wait pays off for grape growers

Still, it was a relief when, because of the PMC's helping hand, Altacor became available in 2008.

As Brewster put it, "That first year we had Altacor, we knew it was a great product right away. We started using it in the vineyards, and it was revolutionary. It was all of a sudden, 'Wow! Where'd all the berry moths go'?"

Registration of the other two products followed: Assail in early 2011 and Intrepid in 2013.

Since then, growers in the Niagara region have gained better control over grape berry moth, thanks in large part to the crop protection specialists at the PMC.

Because of the PMC's work, growers have four new insecticides in their arsenal, the first of which became available in 2006.

Best of all, each insecticide comes from a different chemical family, making them ideal options for rotating among the berry moth generations to better manage resistance.

Today, it's fitting that in this International Year of Fruit and Vegetables, growers are able to use these newer, more targeted tools and softer chemistries.

Not only are they safer, their success depends on a combination of IPM practices like pest monitoring, suppression of pest populations, canopy manipulation and crop load reduction. The kinds of sustainable practices that the United Nations is calling on all growers to use to "improve healthy and sustainable food production."