Hydroponics means simply growing plants in water. The plants are placed in growing media such as rockwool, clay pellets, foam, recycled foam, gravel, peat, sawdust, or coconut fibres, then fed a nutrient solution to make them grow. Since many hydroponic methods employ some type of growing medium these methods are often termed "soilless culture", while water culture alone is true hydroponics.

The process of hydroponic growing in our oceans goes back to about the time the earth was created. Hydroponic growing preceded soil growing. But as a farming tool, many believe it started in the ancient city of Babylon with its famous hanging gardens. They were listed as one of the Seven Wonders of the Ancient World, and were probably one of the first successful attempts to grow plants hydroponically.

Most greenhouse vegetable production in developed countries is done using a hydroponic system. Research at the Harrow Research and Development Centre in Harrow, Ontario has resulted in a patented computerized program called the "Harrow Fertigation Manager" which controls the flow of nutrients to the plants in the greenhouses.

The centre is recognized as the largest greenhouse vegetable research facility in North America. 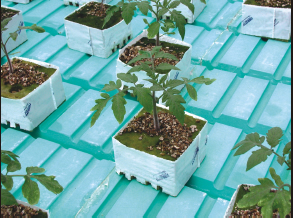 Greenhouse plants start off in Rockwool blocks, then are moved to bigger slabs where they are fed nutrients via the Harrow Fertigation Manager.

Fertigation - The delivery of water and nutrents to individual plants