Agriculture and Agri-Food Canada's (AAFC) National Collection of Vascular Plants, includes thousands of voucher specimens. "Vouchers" are specimens preserved as reference material used in a research project. Such specimens allow researchers to see exactly what material was used and to examine it to answer future questions that may arise. For instance, the use of DNA to confirm and establish identity is an example of the kind of use people did not dream of 20 years ago.

Most of the specimens in the collection are from Canada (about 62%), but the north temperate region of the world is generally well represented (United States of America 20%, Europe 10%). The collection is well developed in the areas of pest species and crop relatives reflecting the priorities of AAFC. The herbarium includes about 50,000 plant species or about 20% of the world total. It also contains 4,000 type specimens which are used by scientists to define the correct use of plant names. These specimens are permanently available for future study and provide an essential foundation for science.

When adequately protected from moisture and pests, dried plant specimens can last for hundreds of years in the herbarium. Shown here is a specimen of an attractive blue-flowered plant called Victorin's Gentian. It was collected by Anne Mary Perceval around 1820. Mrs. Perceval was one of many people who collected plants for Sir William Jackson Hooker who provided the standard reference on Canadian plants for the period of 1840-1883. Today, Victorin's Gentian is a very rare plant confined to the estuary of the St. Lawrence River and considered threatened. The early records from herbarium specimens suggest that it was always a very rare and restricted plant. 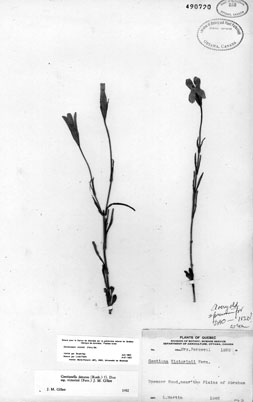 Also shown is a representative herbarium specimen of Marquis Wheat, a cultivar bred in 1892 at AAFC's Central Experimental Farm by Sir Charles E. Saunders. This variety was a major contribution to the Canadian economy and made possible a vast increase in wheat production on the Canadian prairies. It has been described as "one of the world's greatest feats in economic crop breeding". By 1911, it was the first 200 million bushel crop in the West's history. During the First World War in 1915, it made up 90% of the wheat shipped by Canada to France, and was essential at that time since U-boats had cut off supplies from Australia and Argentina. This variety was cultivated on 8 million hectares of the Prairie Provinces in 1928 and at that time accounted for 90% of the area devoted to spring wheat in western Canada. Marquis has been replaced by even earlier maturing varieties that are resistant to more recently evolved strains of rust fungus. Herbarium specimens of Marquis Wheat are still available to researchers studying the evolution of wheat in an effort to maintain a superior crop. 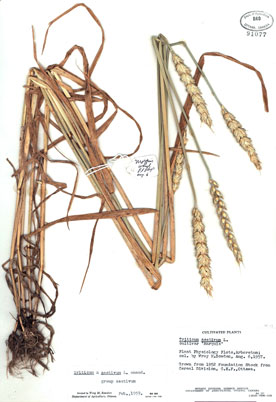