Consulting with Canadians for The Food Policy for Canada

The importance of collaboration

Collaboration that brings together a variety of experiences and perspectives is critical to the success of the Food Policy for Canada.

To support increased access to healthy food, the Government launched the $50 million Local Food Infrastructure Fund. Through investments in infrastructure, this non-repayable program aims to support community-driven food projects, such as those at food banks, farmers’ markets, and community gardens, to facilitate access to safe and nutritious food for at-risk populations. Online consultations with stakeholders were held between June and September 2019 on the parameters of the program.

In May of 2017, Canadians were invited to take part in consultations on Canada’s first-ever federal food policy.

More than 45,000 people shared their thoughts on our food system in an online survey. Hundreds attended regional engagement sessions, a National Food Policy Summit, town halls hosted by Members of Parliament, and other community-led engagement events held across the country.

Consultations were held with organizations representing farmers, fishers, and the food industry; civil society groups with interests in food security, health, and the environment; academics and other experts; officials with provincial, territorial, and local governments; and Indigenous Representative Organizations. 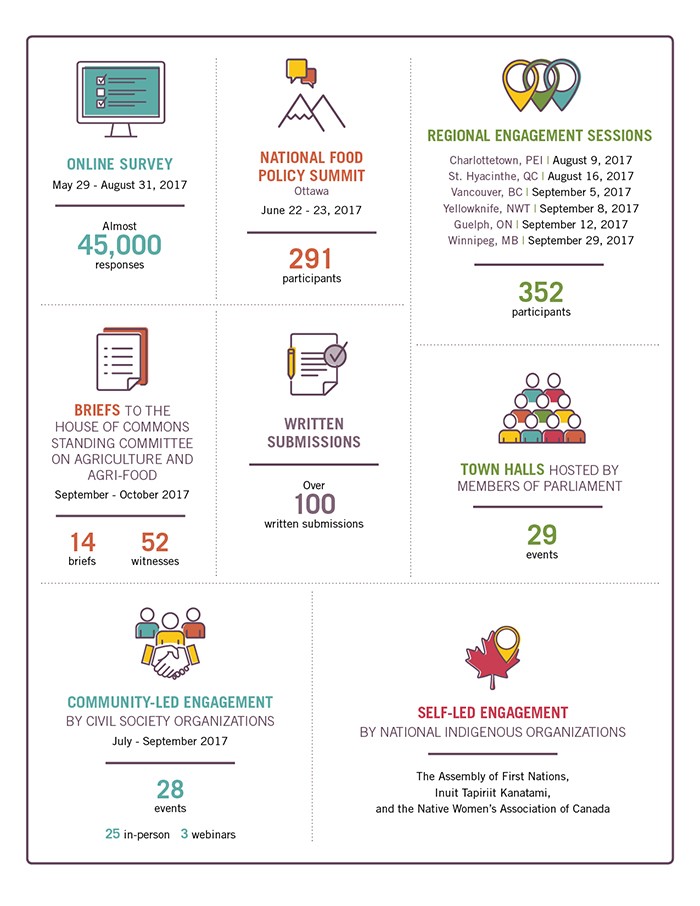 These sessions were designed to provide a space for stakeholders, Indigenous peoples, experts, and key policy makers to share views on the development of the Food Policy and to bring forward innovative ideas and best practices.

A National Food Policy Summit took place on June 22-23, 2017, in Ottawa, Ontario. The Summit brought together over 250 participants with diverse expertise and experience.

Regional engagement took place across Canada over the summer and early fall of 2017 and built on input received during the Food Policy Summit. Over the six sessions, more than 350 individuals attended and provided feedback.

Members of Parliament held 29 "town hall" meetings within their constituencies across Canada, representing views from both urban and rural Canadians. The town halls were held in ridings in British Columbia, Newfoundland and Labrador, Ontario, and Quebec.

For more information, view the full Food Policy Consultations What We Heard Report.

In an effort to connect with local community members, the Government provided funding to Food Secure Canada (FSC) to directly engage with civil society. FSC facilitated 28 consultation sessions, including 25 in-person sessions and three online sessions, to feed into the development of the food policy. FSC consultations included participation from individuals and organizations with interests in North-specific needs, food security, health, the environment, agriculture and farming, fish and aquaculture, economic interests, poverty reduction, and science; and organizations representing food processors and retailers, women, youth, animal and grain sectors, organics, unions, and others.

In addition to input gathered from Indigenous individuals and organizations through the online survey, national and regional engagement sessions, and civil society engagement, the Government engaged bilaterally with National Indigenous Organizations to identify preferred approaches for Indigenous engagement on the development of the food policy.

The Government reached out to five National Indigenous Organizations, and engaged bilaterally with the Congress of Aboriginal Peoples (CAP), Inuit Tapiriit Kanatami (ITK), the Assembly of First Nations (AFN), and the Native Women’s Association of Canada (NWAC). While CAP invited government officials to engage at its Annual General Assembly in September, ITK, AFN, and NWAC opted for self-led engagement on the policy, with support from the Government.

You can still submit your thoughts via email at FoodPolicy-PolitiqueAlimentaire@canada.ca to inform future thinking on food policy.