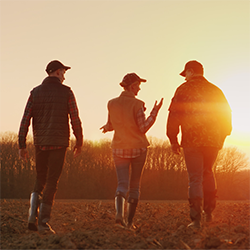 Episode 010 - Mental health on the farm

In this episode we speak with Dr. Briana Hagen about tailoring mental health programs to the needs of farmers. She explains how mental health in farming is fundamentally different than in other sectors. And she points toward solutions and successful programs across the country including the program called, In the Know, which she helped developed at the University of Guelph.

If the podcast player does not work in your browser please try this version of Episode 010.