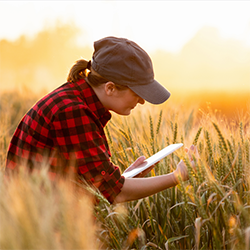 Researchers cannot be everywhere at once. Laura Richard manages the Agroclimate Impact Reporter (AIR). This citizen science projects relies on producers all across the country to help our scientists and decision-makers to know how the weather impacts agriculture at a local scale. Trevor Atchinson is a fourth generation rancher from Pipestone MB and a second generation contributor to AIR.

If the podcast player does not work in your browser please try this version of Episode 015.