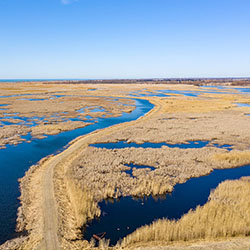 From buckwheat and bees to cover crops and no-till practices, we explore how Henry Denotter, a farmer on the Wigle Creek watershed, and Pamela Joosse, a soil and nutrient management specialist, worked together to reduce pollution in Lake Erie as part of Agriculture and Agri-Food Canada's Living Labs program.

If the podcast player does not work in your browser please try this version of Episode 018.