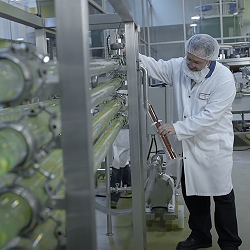 Have you ever wondered where companies go to develop their secret recipes and test new food processing technologies? Canadian innovators go to Agriculture and Agri-Food Canada's research centre in Saint-Hyacinthe, Quebec to develop and test new products. Listen to Sabine Ribéreau, the pilot plant manager, and Deena Alari, the research and development manager from Smuckers, as they discuss the Saint-Hyacinthe Industrial Program and how it can help get your products on grocery store shelves.

If the podcast player does not work in your browser please try this version of Episode 019.